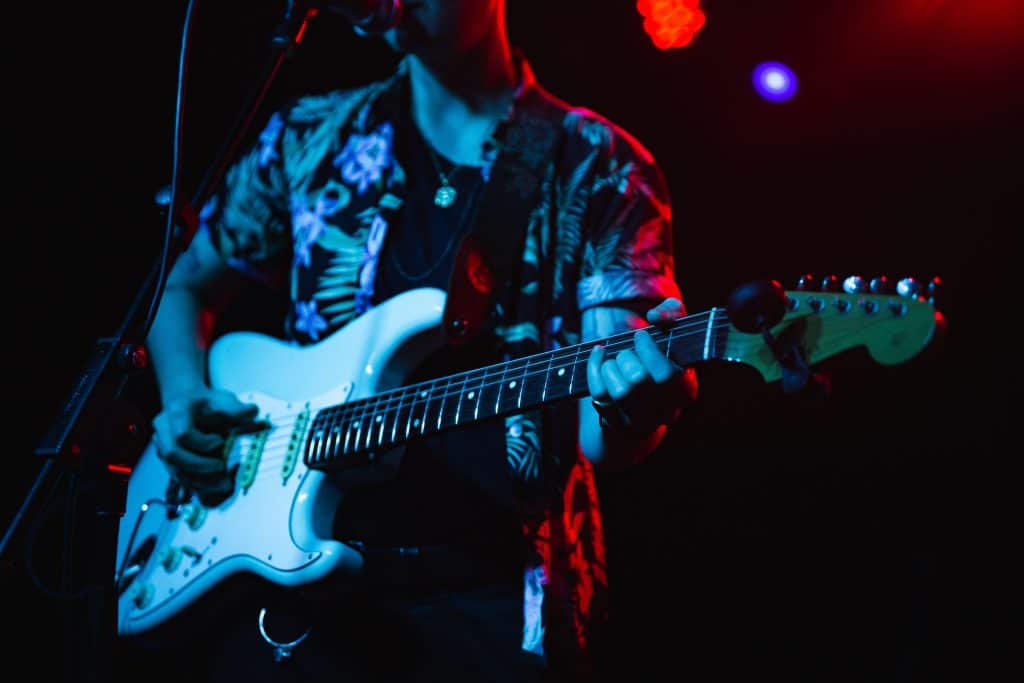 If you’re a budding guitarist looking to add interest and variety to your playing, you’ve come to the right place! Here are 7 actionable tips for making your guitar playing more interesting:

1. Spice Up Your Chords

Spicing up your chords is a fantastic way of livening up your rhythm parts. I’d recommend implementing the following two techniques:

This is where you re-order the notes of a chord. Here’s a quick example:

Inversions add a great deal of richness and variety to your playing. If you’re playing a song that uses the same chord progression throughout, you might consider using inverted chords in the verses and root position chords in the chorus.

Here’s a great video tutorial on guitar chord inversions from fretjam on YouTube:

Extended chords are essentially triads with additional notes beyond the seventh degree of the scale. These are most-commonly 9ths, 11ths and 13ths. Whilst commonly used in jazz music, they’re becoming increasingly-popular amongst rock and pop guitarists due to their interesting and unique character. They can also be used to pivot from one section of a song to another; this not only makes your guitar playing more interesting, but the entire arrangement more interesting.

Effects pedals can add a substantial amount of depth and variety to even the most simple of guitar parts. Similarly, they seem to be the thing that audience members are most-impressed by in a live setting. As a typical ‘plug in and play’ type-guitarist myself, I was hesitant to dive into the world of effects pedals for many years. However, once I did, my playing was absolutely transformed.

Here are a few essential pedals I’d recommend looking into:

N.B. Whilst effects pedals can certainly add interest to your guitar playing, it’s important that you don’t over-do it. Getting too trigger-happy with your pedals can quickly cause the novelty to wear off and take away from the rest of the arrangement.

3. Listen To A Wide Range Of Different Music

Listening to a wide range of different music has two distinct effects on your guitar playing:

Whilst it might sound strange, I’d encourage you to listen to music that doesn’t even feature any guitar. This’ll force you to dig deeper and be as resourceful as possible with the material, causing you to pick up significantly different and interesting ideas.

Another great method of picking up new ideas is to play ‘song roulette’. Here’s a quick breakdown of how to play:

Song roulette forces you to derive and practically implement new ideas from different styles of music, allowing you to progress at an accelerated rate.

Vibrato consists of small, yet rapid fluctuations to the pitch of a note. Each guitarist’s vibrato is generally unique to them, which adds a real sense of interest to their playing. Many well-known guitarists such as B.B. King and Slash are renowned purely for their vibrato technique.

Here’s a great video tutorial on vibrato from JustinGuitar on YouTube:

As the name suggests, this is where you ‘slide’ between notes by keeping your finger on the string(s). This can be used with both single notes and chords, adding a significant level of character to a phrase.

Additionally, you might consider using a dedicated glass slide such as this one. Glass slides are capable of creating strong vibrato and glissando effects, often coming off as extremely impressive in a live setting. Here’s a great video tutorial on using a glass slide from swiftlessons on YouTube:

Bends are exactly what they sound like; fretting a note and then ‘bending’ the string in order to change the pitch. They can truly bring a phrase to life, especially when combined with vibrato. Here’s an all-encompassing video tutorial on bends from Your Guitar Academy on YouTube:

If you want a technique that really grabs the attention of a crowd, look no further. Tapping is where you use both hands to perform a series of hammer-ons and pull-offs. Whilst commonly used in metal music, it generally works across most rock genres. Whilst this is an incredibly flashy technique, you don’t want to over-do it. The novelty quickly wears off if it’s over-used or placed out-of-context.

Here’s a great video tutorial on tapping from swiftessons on YouTube:

5. Use A Strong Dynamic Range

If you’re playing covers, you might consider changing up the dynamics as a way of putting your own spin on the material. This can effectively draw an audience in by providing them with a new take on a song they’re already familiar with.

6. Change Up Your Picking Style

Fingerpicking (picking with the fingers instead of a plectrum) produces a softer and more-intimate sound than flatpicking (playing with a plectrum). It’s also a very visual style of picking, which often appeases an audience. Here’s a great video tutorial on fingerpicking from Marty Music on YouTube:

Sweep picking consists of ‘sweeping’ the pick across two or more strings to play a series of notes (usually an arpeggio) in quick-succession. It looks and sounds awesome, adding a whole new sense of interest to your playing. Whilst generally used in metal music, it works great across all genres of rock music. Here’s a great video tutorial on sweep picking from Alfred Potter Guitar on YouTube:

When trying to liven up your guitar playing, it’s all-too-tempting to blindly play every lick under the sun in an attempt to add variety. However, doing so will only make your playing seem overbearing and distasteful. Much like with dynamics, you can’t create interesting parts unless you directly contrast them with not-so-interesting parts.

When playing in a band, I’m a huge advocate of playing the song instead of the instrument. Playing a part that’s well-suited to the arrangement will come off as much-more-convincing than trying to show off with unnecessary fills and licks. Remember, you can still add interest to a simple part by using subtle techniques such as chord inversions and extensions. Once you have your moment in the spotlight (i.e. a solo or extended jam session), you can add that extra bit of flare with a snappy lick or a few stomps on your pedalboard.