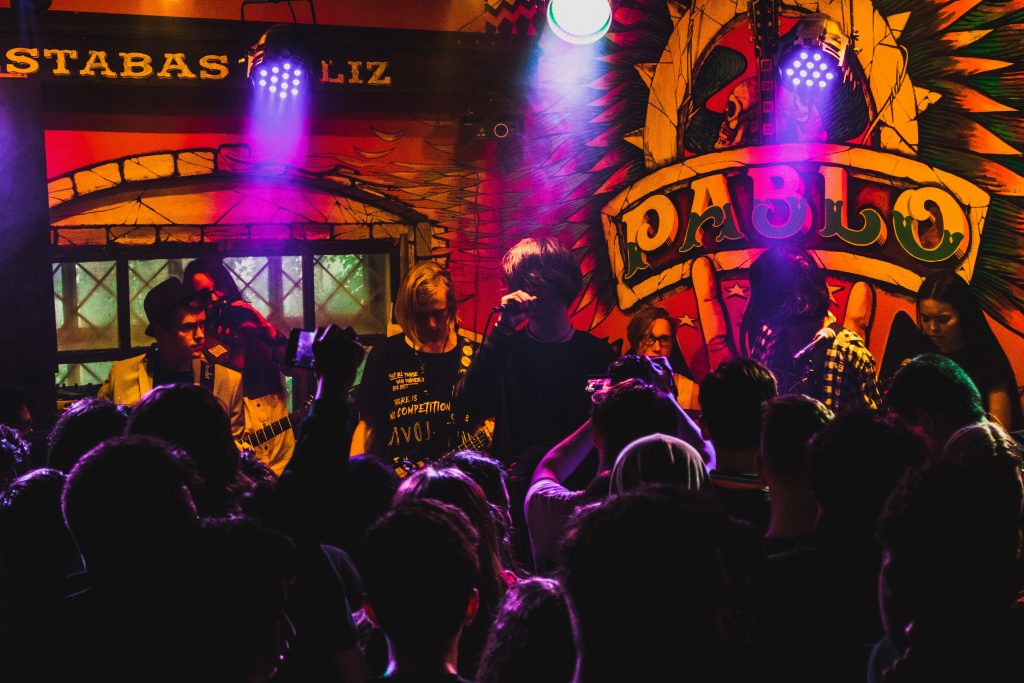 Without a doubt, the most common query we receive from independent musicians is ‘how do I build a fanbase?‘

In short, building a fanbase in music requires you to do the following three things:

Keep reading for a full breakdown of each of the above three points.

STAND OUT FROM THE CROWD

It goes without saying that if you’re trying to build a fanbase, you’ll be in competition with thousands of other talented bands and artists who are hoping to do the same. Whilst this might come off as discouraging, I firmly believe that standing out from the crowd is nowhere near as difficult as you might think.

A primary reason why so many bands and artists fail to stand out is because they’re simply too afraid to do so. Following the crowd seems like a sure-fire way to avoid rejection and failure, yet will almost always yield limited results. In order to stand out from the crowd, you’ll have to conquer your fears of failure and rejection by seeing it as a necessary part of becoming successful in the long-term. Here are some detailed tips to help you stand out:

Write & Release The Best Music You Possibly Can

OK, this one is obvious, but it can’t be emphasized enough. Great songwriting is the cornerstone of your project and you should never get complacent with your skills. Here are a few pointers on writing and releasing great music:

If you’re new to songwriting, check out our article ‘14 Essential Songwriting Tips For Beginners‘.

Both a strong sonic and visual identity is required in order for both audience & industry to clearly distinguish and connect with your project.

Many bands (especially on their debut release) tend to hop drastically from genre to genre over the course of an EP or album. Whilst it’s good to experiment with a few different styles, it’s worth trying to hone in on a set genre in order to maintain a sense of consistency and better appeal to a more focused audience.

Signature traits are where you can really set yourself apart from the crowd. They can come in the form of distinct guitar tones or techniques, vocal styles or even particular song structures. I’d recommend asking those who have heard your music what particular traits set you apart from other bands or artists. Once you’ve done that, you can start to leverage them.

It’s natural for your sonic identity to evolve from release to release, but it’s important to try and retain a sense of overall consistency on each individual release.

Visual identity, whilst arguably the most important aspect of independent music marketing, is all-too-often underestimated by independent bands and artists. Whilst it might be a difficult pill to swallow, both audience & industry are looking for charismatic, personable and good-looking artists with an ability to engage & entertain.

Think about your own motivation for wearing merch from a band you love. You aren’t just publicly showcasing your interest in that band’s music, you’re communicating a set of cultural values, personable traits, hobbies and interests that the band effectively represent.

Here are some pointers on effectively showcasing your visual identity:

As you probably know, nobody is going to find out about you if you don’t actively market yourself. Here are a few pointers on marketing yourself the right way:

When it comes to building a buzz around yourself, it’s important to keep the following in mind:

A strong web presence an absolute must-have for up-and-coming bands and artists (especially from the perspective of a record label, as it means they won’t have to work as hard). Here’s a few pointers on maintaining a strong web presence:

For more help with online marketing, check out our article ‘How To Promote Your Music On Social Media | 21 Game-Changing Tips‘.

Make Time If You Don’t Have It

Plain and simply, things won’t get done if you don’t put the work in. Whilst many bands and artists complain of a lack of time when it comes to working on their music, it’s often in fact a lack of proper time management. If you don’t feel like you have time, you’ll have to make time. Consider giving up that Saturday night out drinking or that Wednesday night binge-watching Netflix in order to work on your music.

Be Consistent In Everything You Do

Taking a consistent approach to your music career will achieve the following two things:

Here are a couple of pointers on taking a consistent approach to your music career:

It amazes me how many bands and artists will spend years taking the exact same approach to writing, recording and marketing their music, then wonder why they keep running into the same problems. With everything you do, it’s important to take time to reflect on what went well (and why) as well as what you could have done differently (and why). Don’t be afraid to take your failures on the chin and see them as an opportunity to improve for next time. In addition, don’t get complacent with things that went well. Take time to understand the reasons why something went well and decide how you can leverage that knowledge in the future.