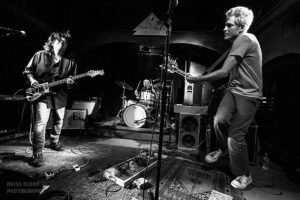 Some of the world’s most famous rock acts have been power trios (The Jimi Hendrix Experience, Rush, Cream, Nirvana, Muse and Green Day to name a few). Whilst this no-nonsense lineup is well known for being both efficient and time-tested, it’s not without its challenges. One of the most common issues that power trios run into is a thin sound, especially when the guitarist switches from a lead part to a rhythm part.

Each member will generally have to put in a bit of extra leg-work to fill things out. However, playing in a power trio can be an immensely fun and rewarding experience, often allowing each member to showcase the very best of their individual talents. I’ve spent several years playing in various power trios and have managed to pick up a few tips along the way (I’ve also had a few thrown directly at me by my performance tutor at University; thanks Simon). For this article, we’ll assume the lineup consists of guitar, bass and drums with one or more of the members handing vocals.

When it comes to the instrumentation, less is often more. Without a roaring rhythm part holding things down, it can be tempting for everyone to think they need to be constantly playing. This runs the risk of resulting in a bland arrangement with few dynamic shifts. Don’t be afraid to drop one of the instruments out for a verse or pre-chorus and then bring it back in once you hit the chorus. This can give the chorus a powerful dynamic shift whilst keeping the audience on their toes arrangement-wise. If your power trio is a covers band, you’ll need to give a bit of extra consideration to how you want to arrange songs that were originally performed by a larger ensemble. Don’t be afraid to scrap the original arrangement and come up with one more suited to your band.

I’m a strong advocate of having everyone contribute vocally if possible. Backing vocals are a fantastic secret weapon for any band and can make a song sound huge. In the power trio format, having two members on backing vocals whilst one handles the lead brings a whole new presence to both the music and the band itself. It’s recommended to have rehearsals dedicated solely to backing vocals as they can be tricky to get right and are a real make-or-break element of live performance.

Depending on what genre of music you’re playing, the lack of mid-range often obtained from an additional guitarist can sometimes lead to an empty-sounding arrangement. I’ve seen lots of three-piece bands get around this by using a foot-operated MIDI synthesizer. These can be easily operated by the bassist or guitarist and they work phenomenally well in a live setting. The most versatile and suitable MIDI foot controller I’ve found is the Behringer FCB1010 (link to Amazon). It comes with a plentiful bank of fully-editable presets and also features tap-tempo, which can be immensely useful in a live setting.

Since you aren’t fighting with another guitarist for the same frequency range, you’ve got a bit more leeway for fuller-voiced and extended chords. In order to keep your part interesting and varied, try changing between open chords, power chords and barre chords for different songs or song sections.

A common mistake I often see from guitarists in general is over-doing the distortion. This can lead to a thin and muddy sound, which can be especially problematic for a power trio. Backing off the distortion helps fatten up your tone and allows the instrument to gel with the rest of the band. EQ-wise, I’ve had the best results keeping the dials at around 12 O’clock to get something that’s nice and beefy without being too thin or muddy.

Being a ‘plug in and play’ type guitarist myself, I was dragged kicking and screaming into the world of effects pedals by my aforementioned University tutor. Whilst I can understand the temptation to just crank it up and let it rip, even a small pedalboard can add a huge amount of variety to your sound. Both reverb and delay pedals can add a significant amount of depth to your sound and can really liven up your lead parts. The best reverb pedal I’ve found is the Donner Verb Square 7 Modes (link to Amazon). It Allows you to choose from seven different reverb models, which is especially useful if you’re performing live as different models will suit different rooms. The best delay pedal I’ve found is the Boss DD-7 (link to Amazon). It gets a fantastically warm analogue sound and allows you to really push the boundaries from a creative standpoint. 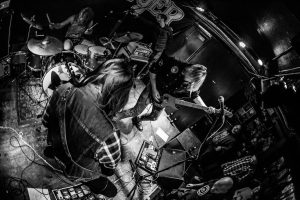 A common issue with the power trio format is that the momentum can often drop out when the guitarist switches from rhythm to lead. In order to compensate for this, try playing your part an octave higher to fill out the sound whilst the guitarist plays their lead parts. Another technique is to employ chords and drones into your playing, a technique that was famously used by Motörhead’s Lemmy Kilmister. The lack of a second guitarist gives you room for a more interesting and melodic bassline; Green Day’s Mike Dirnt and Cream’s Jack Bruce are phenomenal examples of this. Try walking around the progression to create your own song within the song.

The main aim here is to hold down the low end whilst also filling out the mid-range as much as possible. EQ-wise, try setting the bass at around 12 O’clock whilst boosting the treble and presence slightly to punch through the mix.

Adding a subtle distortion pedal can really fatten up the mid-range. This can also be turned on when the guitarist switches from rhythm to lead to keep the momentum from dropping out. The most suitable bass distortion pedal I’ve found is the Electro-Harmonix Big Muff Distortion (link to Amazon). It has both sustain and bass-boost features which can really fill out the mid-range when your guitarist switches from rhythm to lead.

Many power trio drummers have earned themselves a reputation for being wild and unstoppable. With only three of you, you’ve got a bit more room to fill out the overall sound with a busier technique. However, keep the song in mind and be careful not to over-do things.

Many power trio drummers use slightly larger drums in order to get a large, boomy sound. This works especially well when taken hand-in-hand with a busier technique. Another great technique is to tighten your skins a bit more than usual in order to provide a bit of extra mid-range.

To sum up, playing in a power trio can be a brilliant experience and I credit it to making me a much better musician. With nowhere to hide, all three members will have to give careful consideration to their tone, technique and the material’s arrangement in order to make the lineup a success.