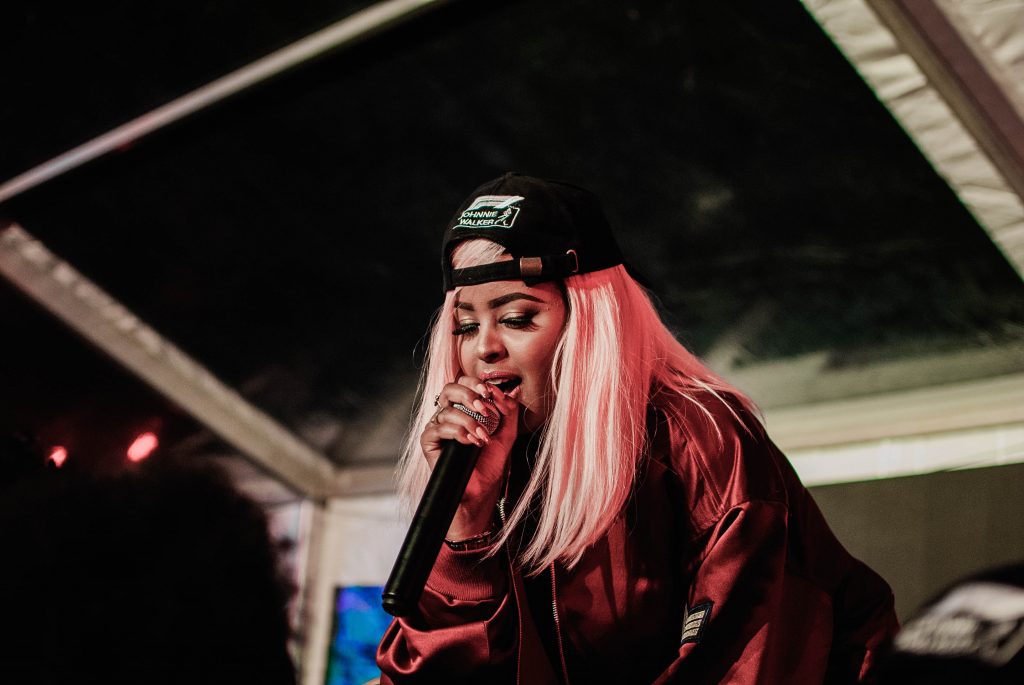 Having killer stage presence can make all the difference when you’re trying to win over a crowd. Here are 25 stage presence tips that’ll change your shows forever:

1. Don’t Let Self-Doubt Hold You Back

When it comes to stage presence, I fully believe that one of the biggest things holding musicians back is their own mindset. It’s easy to start thinking the following:

Ultimately, it’s important to remember that the audience are paying to see a show. As a result, they’ll expect your performance to be visually engaging. If you try to play it safe by looking uninterested or timid on stage, that’s exactly the impression you’ll portray to your audience. Even if an attempt at crowd participation falls flat, the audience will at least respect you for putting on a show. Here are a couple of actionable pointers on overcoming a counter-productive mindset:

Gig nerves are a very real thing. In some cases, they can be so severe that they start to fuel your self-doubt and impact your stage presence. Here are some actionable pointers on managing nerves:

3. Mingle With The Crowd Before The Show

This is one of my all-time favorite stage presence tips. Before playing your set, try and mingle with as many people in the crowd as possible. If you’ve already engaged with members of the crowd before your set, you’ll be much more likely to do it during the show. In addition, the audience will often be much-more responsive if they’ve already had a chance to warm up to you.

One of the biggest things Indie Panda preaches is the fact that people buy people, not products. As a result, a crowd is much-more-likely to connect with a band’s music if the members are personable and interesting individuals. Make sure to showcase your personality with on-stage banter between band members or some crowd interaction between songs.

It’s going to be difficult for the crowd to connect with you if you’re constantly staring at your instrument. Instead, I’d recommend doing one (or both) of the following techniques:

Many bands structure their set in the following manner:

This is an incredibly common, tedious and uninteresting method of playing. In addition, silence communicates unprofessionalism and can cause an audience to quickly lose interest. Instead, try incorporating the following into your set:

When writing out your setlist, make sure you include your transitions as well as what to say in between certain songs, such as in the picture below: 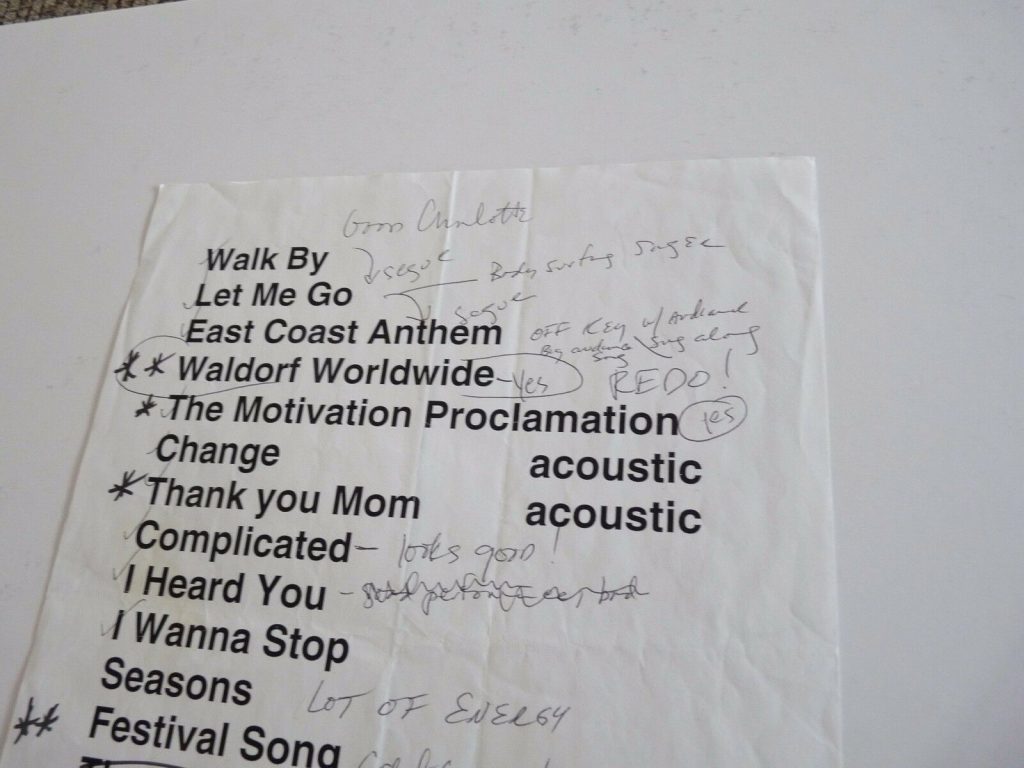 If you’ve got a little extra leg room on-stage, use it! Moving around the stage makes the performance much more interesting to watch and adds a real sense of energy.

If you’re planning on moving around on-stage, it’s worth making sure you’ve got the right equipment to-hand. I’d recommend investing in an instrument cable that’s at least 25 feet long. In addition, make sure you loop the cable through your strap so you don’t pull it out of the jack by stepping on it. If you’ve got a little extra budget, I’d recommend investing in a wireless guitar system such as this one on Amazon. Wireless guitar systems are generally much safer than instrumental cables as they eliminate trip hazard.

I spent years playing live without even thinking about my facial expression. However, this quickly changed when I watched some video footage back that showed me looking bored and uninterested. In addition, many musicians tend to unknowingly make embarrassing facial expressions whilst playing (commonly known as ‘guitar face’).

Something that all-too-many bands and artists don’t realize is that fans connect to visual identity just as much as sonic identity. As a result, it’s vital to have a clear and coherent image on-stage. In addition, having a distinct image can really help to boost your confidence whilst performing. Here are a couple of pointers on looking the part:

13. Interact With Your Bandmates

This is a great way to showcase your group sensitivity on-stage. Here are a couple of ideas for interacting with your bandmates on-stage:

As previously mentioned, the crowd wants to feel as if they’re part of the show. Here are a couple of ideas for involving the crowd:

Even if you’re playing in front of a tiny audience, I’d still recommend involving the crowd. People are much-more-likely to remember your set if they actively participated in it.

If you’re going to be addressing the crowd, it’s important to do it in an assertive manner. As previously mentioned, the crowd will be much-more-likely to buy into your stage presence if you’re exuding confidence. Here are a couple of actionable tips on speaking assertively:

Hand gestures are a great way to involve the crowd and keep the show visually engaging. Here are a couple of ideas for hand gestures:

Props can be a fantastic addition to a live show. Here are a couple of ideas for props:

18. Use A Strong Dynamic Range

Whilst not directly related to the visual element of your show, a strong dynamic range can add a significant amount to your overall stage presence. The trick is to ensure your quiet parts are really quiet and your loud parts are really loud. It’s worth keeping in mind that you can’t have truly loud sections if you don’t contrast them with quiet sections. 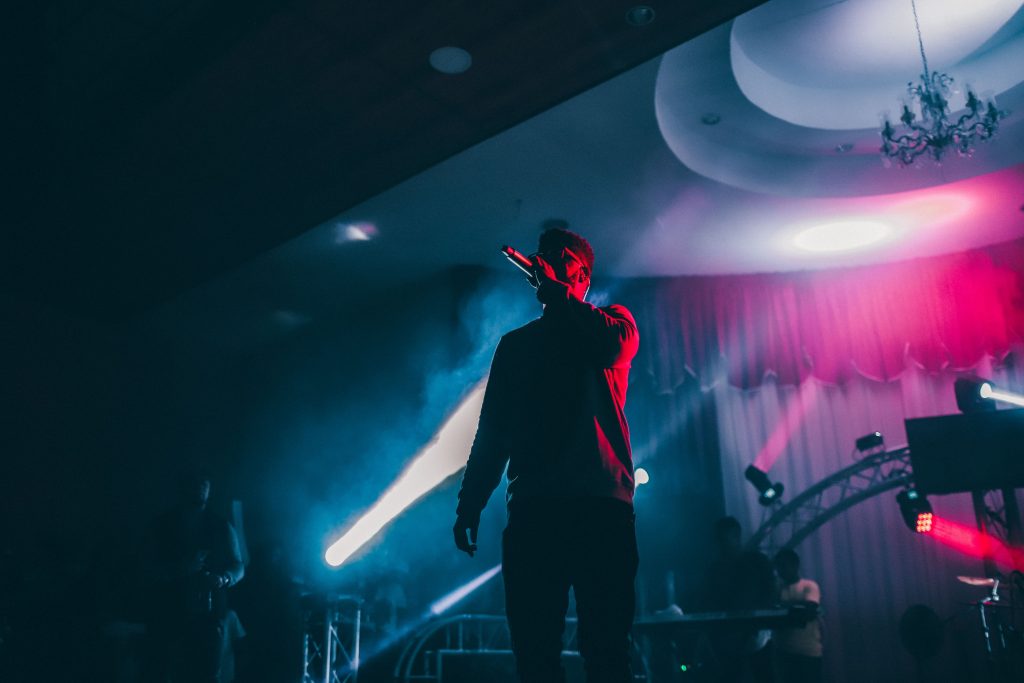 This is a great little trick that looks very convincing. If you aren’t singing, look out at the crowd and mime the words at key points of the song (such as the chorus). Whilst this can look awesome, it’s important not to overdo it. There’s a fine line between looking like you’re feeling the music and looking like a total idiot.

This tip goes hand-in-hand with the above one. Pointing the headstock of your guitar towards the crowd at key points of the song can look great. Additionally, it often looks cool if you rest one foot on a monitor speaker as you do this.

This is one that many bands don’t consider, yet it can offer a considerable advantage. If you’re playing a high-energy set for an extended period of time, it’s important to stay in reasonably good shape so you don’t lose steam halfway through the set. As soon as I began doing cardio five times a week at the gym, I noticed that it had a significant impact on my stamina whilst performing.

Whilst keeping fit can improve your stamina, it can also help to improve your look. Whilst it might be a bitter pill to swallow, looks can often be a standout factor when operating in a mainstream market. For more information on the impact of looks, check out our article ‘Do Looks Matter In The Music Industry?‘

23. Incorporate Stage Presence Into Your Rehearsals

In short, you can’t expect your stage presence to appear effortless if you haven’t rehearsed it beforehand. Make sure you’re incorporating the following into your rehearsals:

The best way to fully-evaluate your stage presence before a show is to video your rehearsals. Videoing your rehearsals allows you to view your band from an audience perspective and make any necessary changes. I’d thoroughly recommend investing in a dedicated video camera to record rehearsals in order to keep everything in one place. The best value camera I’ve found is the WEILIANTE Digital Camcorder on Amazon.

24. Reflect & Review On A Regular Basis

With everything that you do in your music career, it’s important to reflect and review on what went well (and why) and what could be done differently (and why). When reflecting on your stage presence, I’d recommend holding a band meeting where you watch back footage of a recent show and have an open discussion about it. When reflecting on your stage presence, don’t be afraid to point out strengths or provide constructive criticism to other members. In addition, try not to take any constructive criticism you receive personally. Instead, simply see it as an opportunity to best-leverage your talents in the interests of the band.

Playing live music is a truly exhilarating experience. Don’t be afraid to let loose and have a good time when you’re on stage. If the audience sees you having a good time, they’ll almost-certainly feed off of your energy.