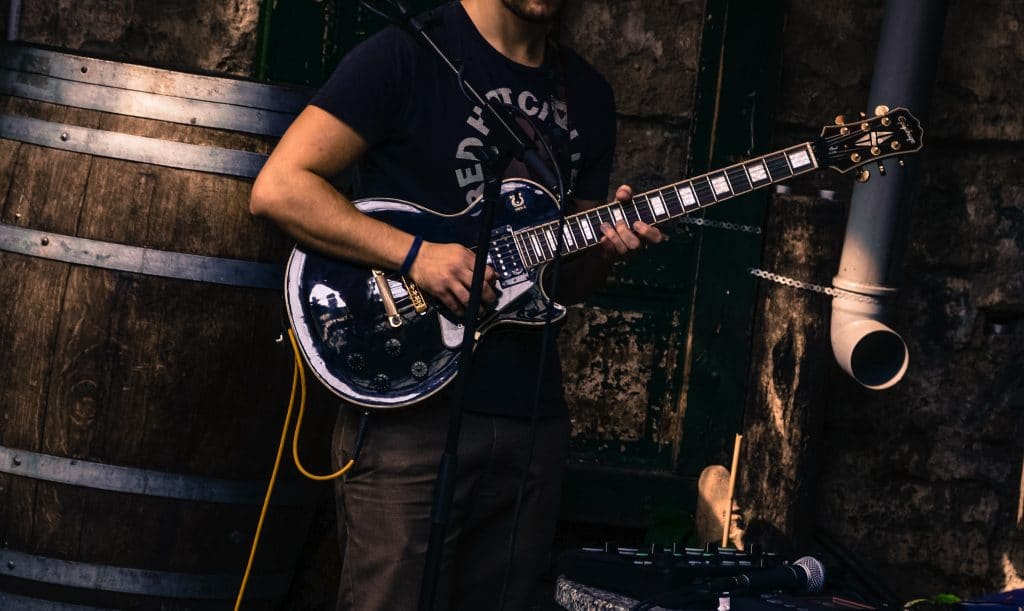 If you’ve recently attended a concert, you might be wondering why the guitarists kept changing guitars during the set. Whilst you might not know it, there are actually a whole host of reasons why guitarists do this.

So, why do guitarists change guitars on stage? Guitarists will commonly change guitars in order to use a different tuning, obtain a different tone or compensate for a technical issue. In addition, they may be showcasing a new product range (as part of an endorsement deal) or visually expressing the mood of the music they’re playing.

Keep reading for an in-depth explanation of each of the above points.

To Use A Different Tuning

This is one of the most common reasons a guitarist will change guitars on stage.

The tuning refers to the pitch of the guitar strings. Guitarists may make use of a range of different tunings for the following two reasons:

Here are a few common tunings that guitarists may employ throughout a set:

To Obtain A Different Tone

Tone refers to the way a guitar sounds. There are a wide variety of factors that affect the tone of a guitar, including:

Therefore, different types of guitars will have very different tones. Here are a few examples:

To leverage this, guitarists will use different types of guitars for different songs. A heavier song might call for a Les Paul, whilst a more blues-tinged song might require a telecaster.

To Compensate For A Technical Issue

If you’ve ever seen a guitarist change guitars in the middle of a song, it almost-certainly will have been due to a technical issue. As much as a band and their crew may work to prevent technical issues, they’re an inevitable part of live performance. Here are a few common examples:

To Promote A New Product Range

It’s common for guitar manufacturers to loan a new range of guitars to a well-known guitarist for the duration of a tour (commonly known as an ‘endorsement’). This is a form of influencer marketing; it allows manufacturers to associate a particular guitarist with their product, then subsequently promote it to hundreds of thousands of people. Therefore, guitar players who are influenced by the endorsed guitarist will be strongly inclined to purchase the same model of guitar, with hopes of achieving a similar tone.

A typical endorsement will see a manufacturer loan a guitarist between 5-10 guitars, asking them to equally showcase each model on each night of the tour. The guitarist may also be required to take part in interviews regarding the new product range, which the manufacturer can use within their marketing material. The guitars are commonly given back to the manufacturer after the tour, before being loaned to a different guitarist.

So, there you have it! A summary of the common reasons why guitarists change guitars on stage. If you have any further questions, feel free to leave a comment and I’ll answer them as soon as I can.