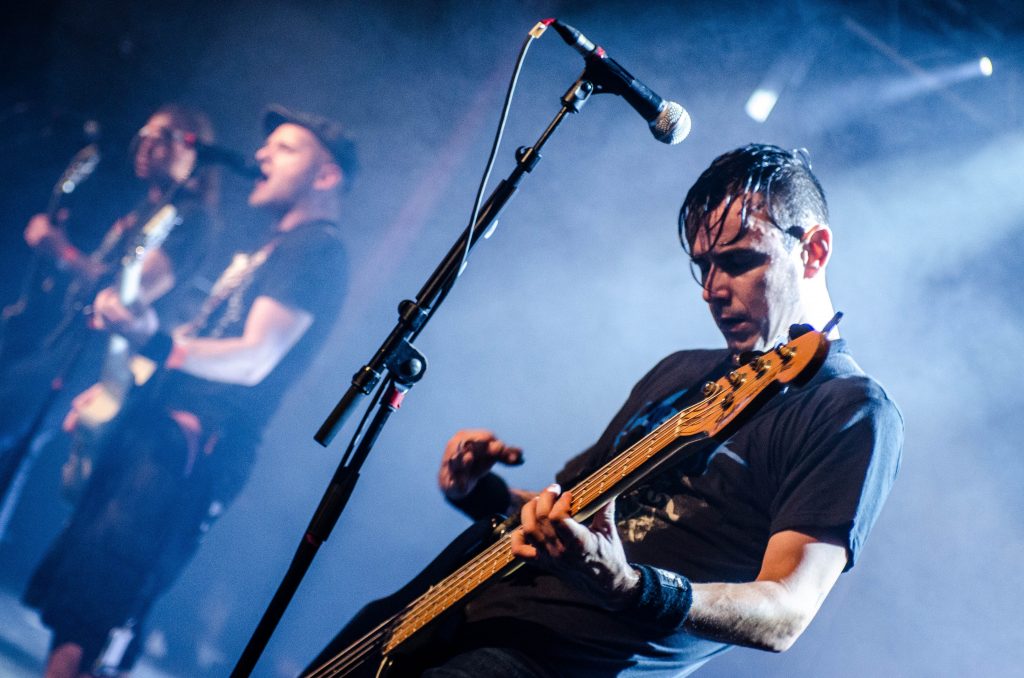 As a non-musician, you might be curious about why musicians say ‘1234’ before (or even during) a song. Whilst it’s something you will have almost-certainly become accustomed to through shows you’ve attended and recordings you’ve listened to, you might not know what (if any) real benefit it has.

Keep reading for a detailed account of each of the above benefits.

To Establish The Time Signature

The time signature indicates how a piece of music is to be counted. A ‘1234’ count-in is almost-always used for a song with a 4/4 time signature, meaning there are 4 beats to every measure. To better-understand how the 4/4 time signature works, here’s a great visual diagram provided by Sussex Guitar Lessons

As you can see from the above picture, the piece is divided up into groups of four beats. In order for a musician to play the piece effectively and stay in time, they’d have to subconsciously count each beat of each measure in their head.

Therefore, a ‘1234’ count-in lets musicians know that the piece they’re about to play is in 4/4 time. This is especially important if:

To Establish The Tempo

There are three primary tempo-related benefits that a verbal count-in provides:

It establishes the ‘live’ tempo

Many bands and artists will change up the tempo of a song in order to make it more convincing in a live setting. In order to prevent the musicians from mistakenly starting at the tempo of the recorded version, a verbal count-in will often be employed.

It limits the negative effects of nerves

When performing on-stage, musicians will often be dealing with significant nervousness. If the song starts with a single instrumental part, a count-in is not necessarily required. However, the musician who starts the song may be so nervous that they get the tempo badly wrong. Their nerves may cause them to start off at too-quick a pace out of anxiousness, or too-slow a pace due to being overly-cautious. Starting a song at the wrong tempo can be an absolute disaster, causing other musicians to make mistakes or come across as unconvincing.

In order to circumvent this, many bands will ask their most calm-and-collected member to perform a verbal count-in, which ensures each song is performed at the correct pace.

The human voice is an incredibly delicate and volatile instrument. It’s also what an audience will generally pay the most attention to. There are two primary reasons a band would have to adapt the tempo to the needs of their singer:

To Establish The Feel

Feel refers to the attitude & presentation of a song. For example, a song might be described as gnarly or poignant. A verbal count-in allows a musician to use the tone of their voice to establish the song’s ‘feel’, encouraging the other musicians as well as the audience to adopt the intended frame of mind. Here are a couple of examples:

To Ensure Everyone Comes In At The Same Time

If a single musician starts off the song, a count-in is not necessarily required (as the other musicians will use the introductory part as a guide on when to come in). However, if a song starts with two or more musicians playing simultaneously, they’ll need a way of knowing exactly when to come in.

A verbal count-in serves as a great way of instructing the musicians when to come in. The ‘1234’ count-in essentially serves as a silent ‘pick-up’ measure, with the musicians coming in on beat 1 of the succeeding measure (i.e. the first measure of the song). This ensures everyone comes in at exactly the same time, allowing the song to start off without any timing issues.

To Instruct The Crowd

As we’ve established, verbal count-ins carry a range of benefits and serve as a fantastic guide for both a band and their audience. Due to this, you might find yourself thinking the following:

“How do musicians derive these benefits without saying 1234?!”

Well, there are several alternatives to the traditional ‘1234’ count-in: