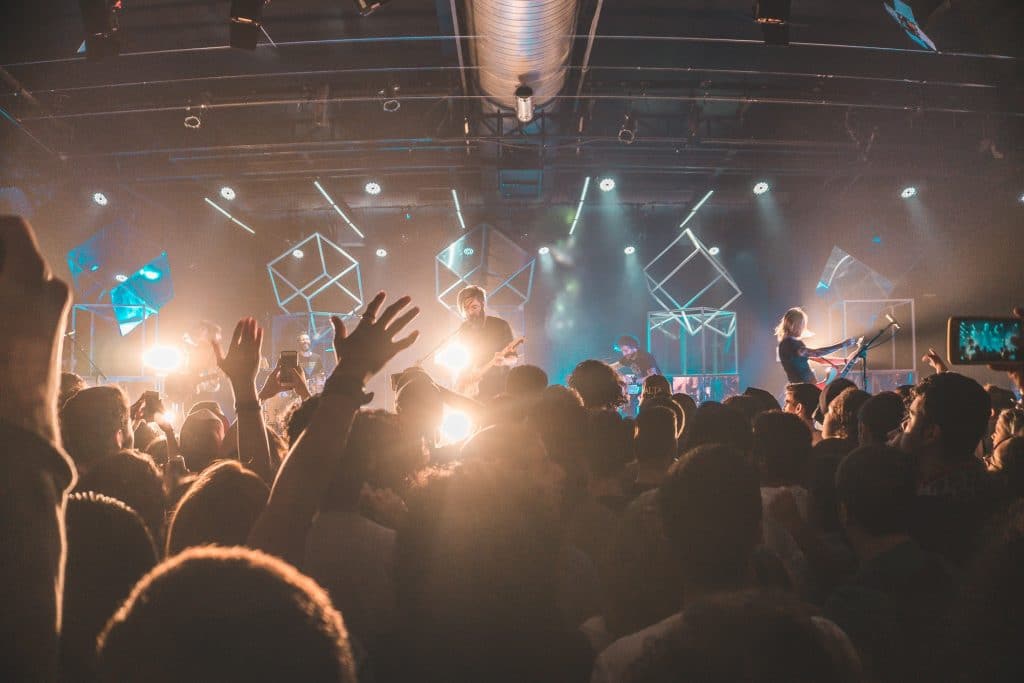 As a non-musician, you might be wondering what musicians actually do after a concert. Whilst it’s tempting to conjure up images of wild parties and trashed hotel rooms, you’d be right in thinking this is an unrealistic depiction of a typical post-concert routine.

So, what do musicians do after a concert? After a concert, musicians will first debrief the  performance between them, before debriefing the technical aspects of the show with their crew. They will then shower, eat a meal, greet their fans and spend the rest of the evening on their tour bus or at a hotel.

Keep reading for a realistic account of a typical post-concert routine for a touring band:

Immediately after walking off-stage, the band will re-group in their dressing room to debrief the show. Debriefing usually happens in two stages:

For the first 20-45 minutes after the show, the band members will be left alone in their dressing room to discuss the show between them over a couple of drinks. The discussion will typically include:

Once the crew have packed everything up, they’ll then head to the band’s dressing room to debrief the technical aspects of the show. The discussion will typically include:

After debriefing, the band members will take it in turns to shower (as they’ll likely be sweaty following the concert). As venues are notorious for being both hot and stuffy places, many musicians will opt for a cold shower after a show.

Bands tend to avoid heavy meals prior to a concert in order to prevent stitch. Furthermore, they will have expended a significant amount of energy during the show and may have had a few drinks, meaning they’ll be hungry. Whilst the members are showering, one of the crew members will typically put in an order for takeout. This’ll usually be something greasy and calorific, such as pizza or Chinese food. It’s also common for bands to opt for local cuisine (it’s almost a rite of passage for bands to order deep dish pizza when playing in Chicago).

If takeout isn’t an option (or the band simply doesn’t feel like it), the catering team may make something for everyone. This’ll usually be something quick and communal, such as sandwiches, hot dogs or a pot of chilli.

Once everyone’s been showered and fed, the band will meet any fans that have hung around after the show. These fans will usually be waiting outside the band’s tour bus, eager for an autograph/photo and a brief chat with the members. The fans that hang around to meet a band after a show are often the most-dedicated, meaning the band will want to give the best representation of themselves possible. Similarly, the fans may have attended multiple shows on the same tour, meaning the members would’ve had the chance to develop a relationship with them.

Some bands opt to host a dedicated meet & greet session after the show, where fans can briefly meet the band, receive an autograph and have a professional photograph taken. Meet & greets are sold as a ticket add-on and are now standard procedure following the recent decline of record sales.

Head To The Tour Bus/Hotel

Once they’ve greeted their fans, the band will retire to either their tour bus or a hotel for the night. Here, they’ll usually take part in one (or several) of the following activities to unwind before going to sleep:

Following this, the band members will head to bed and get ready for the next day of tour.

So, there you have it! A realistic account of a typical post-concert routine for a touring band. If you have any further questions, feel free to leave a comment down below and I’ll answer as soon as possible!